Early phone call this morning to arrange meeting some friends to ride from Santa Fe to Grants. Two close friends arrived from Seattle to join the Mother Road ride. Five bikes riding into the smoke filled skies. Just outside of Albuquerque one bike experiences a broken throttle cable. It was the "rice burner"...not one of the Harleys. Several phone calls later we locate a unique motorcycle shop where they make a new cable. Back on the road. 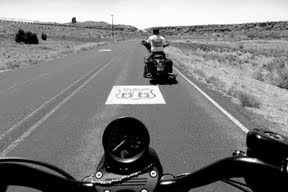 Open road...smoke clears...blue skies. Throb of the Harleys fill the air. After riding so many days alone the past three weeks I enjoy the company of my friends riding the Mother Road together. 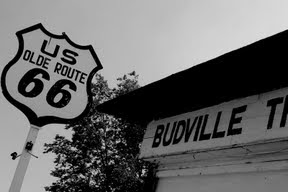 We ride the road not seeing another car. Past red cliffs, black lava beds, into a time of the past. Budville Trading Post was once a major stopping point along the road. 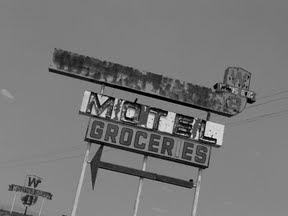 Whiting Bros gas stations and motels were some of the early services on the Mother Road. Now only the signs can be found.

Into Grants as the sky fills with heavy smoke from the AZ fires. We are only about 60 miles north of the fires. Ash falling from the sky casts a white shadow on my bike. We talk about the weather, the fires, all the things that are changing. A common thread flows through our conversation...time to start paying attention to these things. 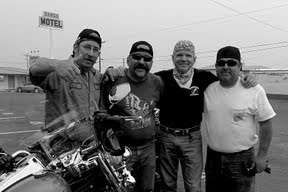 Time for Steve, Frank, and Saturnino to turn back east. They ride with the setting sun on there backs returning to Santa Fe. It was a very good day..a very good ride...filled with brotherhood.