Two days on the Mother Road in Oklahoma: 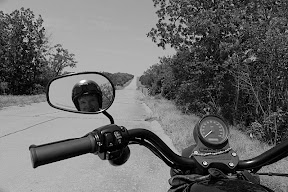 The Mother Road dips and rises straight across Oklahoma. Much of the original road is intact. It has been two days of thumpy thump along the concrete roadway. Seen so much and experienced so many incredible people the past two days. Hard to believe it has been only two days. 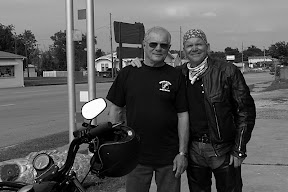 In Stroud some of my friends I have been working with in Bokoshe drove up and we met at the historic Rock Cafe. That's Tim from Bokoshe on the left. 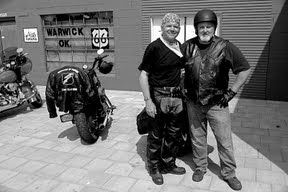 Carl Shortt rode his bike and met me in Chandler. We had a great ride from there on down to Oklahoma City. The ride included a stop at the DX station and motorcycle museum at Warwick. More on this will be in the book of the trip. 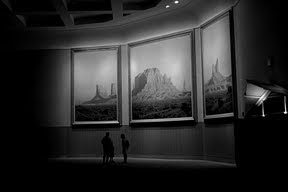 After arriving in Oklahoma City Carl's dad...also Carl, gave me a great tour of the area including the National Cowboy Museum. If you have not experienced this...put it on your list. It is a must see in Oklahoma City.

After a wonderful dinner with the Shortt family we spent the evening at the Federal Building Memorial in downtown Oklahoma City. 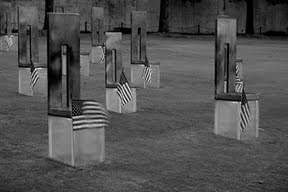 How many times I have driven by the exit while traveling on I40. The memorial is a tranquil yet powerful place. A place to reflect on the senselessness of violence.

Left Oklahoma City this morning. Route 66 passes through El Reno the location of a violent tornado last week. As I rode into the path of the tornado it is difficult to express with words what I saw. I stopped along the road. A pickup pulling a trailer pulled up next to me. 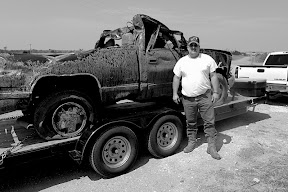 I met Tim Hobson a local resident. He and some friends had been out looking for his truck which was destroyed by the tornado. They had just found it. He wanted to talk. For the next twenty minutes he told me about several of his friends who had perished in the tornado. Tears came to his eyes and mine. One minute a stranger along the road...minutes later two individuals sharing together the emotional impact of a violent event.

Two days on the Mother Road in Oklahoma. Changes in my life forever.